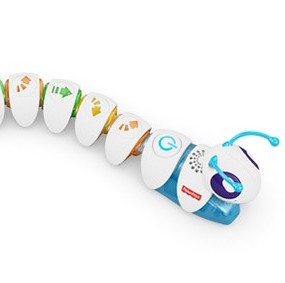 Like many other tangible tech enthusiasts, I was excited to hear about the new Fisher-Price Code-a-Pillar toy when it made its debut at the 2016 International Consumer Electronics Show. Over the summer the Code-a-Pillar became widely available to consumers and I was thrilled to finally get my hands on one in August.

Unfortunately, when I began testing my Code-a-Pillar, I was immediately disappointed by the product because the toy constantly makes noises and plays music at a very loud volume. This could be a potential disaster in an early childhood classroom, especially among children with sensory issues. I wrote to Fisher-Price through their website and asked if there was a way to disable or mute the sound and they replied no.

Then I contacted Michael Peshkin, a Northwestern robotics professor and a member of the advisory group for the Center for Talent Development summer Leapfrog program where I work as the Early Childhood Coordinator. Michael made a quick house call and coached me through a simple hack that resulted in a very quiet caterpillar.

I removed the batteries and opened up the main section of the device by unscrewing the four silver screws with a Phillips screwdriver. I wasn’t able to fully remove the cover from the base because there are wires connecting the main device to the lights and the speaker on the underside of the cover. But I was able to identify the blue wire that connects the speaker to the main device and I simply snipped that wire.

Now my Code-a-Pillar is completely silent, but all the other functions still work perfectly. I’ll be testing this device with a group of young children this fall and I look forward to observing how they play with the Code-a-Pillar. I’m interested in incorporating the Code-a-Pillar into a growing inventory of tangible tech devices that I use to teach coding and robotics concepts to young children through hands-on, collaborative, and developmentally appropriate activities.