The Robot as Literary Figure 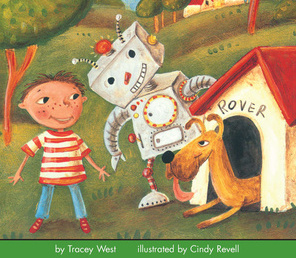 Recently I gathered a collection of picture books about robots (thank you, Evanston Public Library) as part of my work developing robotics curricula for young children. I’m looking for some engaging read-alouds that will spark creative, critical thinking around the essential question, “What is a robot?”

I discovered that the robots portrayed in most children’s storybooks usually fall into three categories. The first category I’ll call Robot as Dorothy’s Tin Man. Like the Tin Man character in the Wizard of Oz, the robots in this category are people made out of metal, robots who wish to be human or to have human feelings. A notable example in this category is David Lucas’ The Robot and the Bluebird. In this book the eponymous robot is abandoned in a scrap heap because he has a “broken heart” that can’t be repaired. The robot befriends a bluebird in a manner similar to Oscar Wilde’s tale of The Happy Prince, in which a statue of a prince teams up with a little swallow. I won’t give away the ending of The Robot and the Bluebird, but I will say that Lucas seems to be drawing some provocative parallels here between recycling and resurrection.

The second category of robots in children’s books I’ll call Robot as Clown. In this category, the author pokes fun at the idea of man as machine. For example, Denny Hebson’s rhyming picture book, Robots Everywhere, illustrated by Todd Hoffman, presents a colorful and cartoonish world where robots are “serving cake with motor oil” and “sleeping under sheets of foil.”

The last category, and the one that interests me most, I’ll call Codable Robot. In real life, lines of code written by computer programmers control the actions of robots. Sure, I could find nonfiction books for older children that explain computers and robotics, but I’m looking for playful, colorful and creative books that will engage and inspire curious young minds. So far, I have found only one illustrated fiction book for young children that demonstrates, with any accuracy, the concept that robots are controlled by code. Me and My Robot, written by Tracey West and illustrated by Cindy Revel, tells the story of a boy named Reese as he and his robot work to help locate a lost kitten.

Reese’s robot begins the search by asking, “WHAT IS A KITTEN?” Although the text does not incorporate any programming terms, the lines of dialogue between Reese and his robot essentially serve as the computer code that directs the actions of the robot. Reese tells his robot, “A kitten is an animal.” The robot finds an animal, in this case a big dog. The robot responded to the “code” successfully but now Reese must refine his code. He tells the robot, “A kitten is a small animal,” and, later, with even greater detail, “A kitten is soft and furry.” Reese gives verbal commands to his robot in a manner that is very similar to the way lines of code are written by computer programmers. Now this is a book I can use! Young students learning programming can be encouraged to make connections between Reese’s experience troubleshooting his “code” and their own experiences refining their programs.

Here’s a list of the robot storybooks I’ve reviewed so far. If you know of others, dear reader, please note the title and author in the comments section below. Thank you!

The Robot Book by Heather Brown

Boy and Bot by Ame Dyckman

The Robot and the Bluebird by David Lucas

Me and My Robot by Tracey West

Robots at Home by Christine Zuchora-Walske